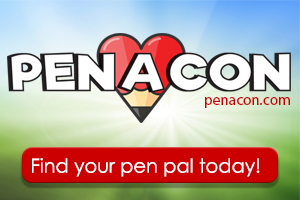 One of the worthy causes they’ve supported is pen paling with American inmates. Thousands of inmate lives have been positively influenced by pen pals sending one or two letters a month.

Some pen pals choose to be more active, i.e., helping their pen pal connect with an innocence project, a publisher or a even a job upon release.

One out of ten Americans have been arrested (37 million) and over 600,000 inmates are released each year. The reality is, ex-offenders are our neighbors, our customers, our employees or bosses. Inmate issues and reentry into society are now covered by our mainstream media: 60 Minutes, Wall Street Journal, Fox News, NBC, ABC, Entrepreneur and Los Angeles Magazines and hundreds more.

Penacon is a popular pen pal website where inmates seek pen pals by displaying their profile, art or poems. One of Penacon’s clients was George Kayer, America’s most published inmate. George is a firm believer in pen paling stating: “Without the encouragement and support of my pen pals I wouldn’t have begun writing again. Pen pals helped me become the son my mother could be proud of.”

Penacon’s website makes it simple to view, choose and send message to one or dozens of inmates. Checkout their tips on writing to an inmate. And of course, use your common sense cautions used in any new contacts and communications.