Freebird Publishers breaks the mold of usual by providing a way to be extraordinary. They offer a way for those who are at their lowest to rise the furthest. In their Inmate Shopper, Freebird Publishers provides American prisoners the information that can make anyone the most important person in the world to somebody. 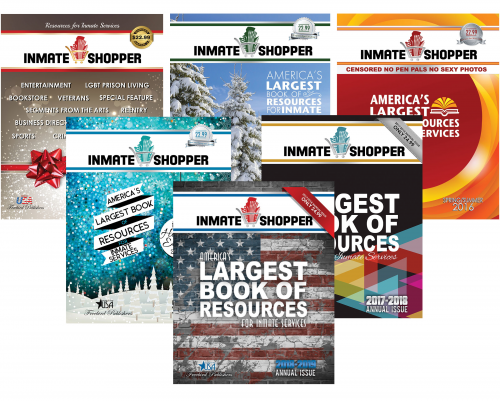 Inmate Shopper is America’s largest non-nude prison friendly inmate shopping guide and services directory for Prisoners! Inmate Shopper is an In-print publication that offers inmates a safer way to shop and access business information all in one place. Freebird Publishers have researched all the businesses listed in Inmate Shopper to keep them updated in every issue. Inmate Shopper informs its readers about established and newer companies and offers information on pen pal services, scams, opportunities, and places to sell their writing, arts, and crafts. Only Inmate Shopper lists Pen Pal websites, Personal Assistants, Gift Boutiques, Businesses that want to send you their catalog and listings of services for writers, poets and artists. Companies are listed in Inmate Shopper alphabetically by business name and information about that company can include contact info, area served, cost of catalogs, payment methods, whether or not a SASE is required and a business review and rating of the company. Businesses Rated 10 receive the Inmate Shopper stamp of approval so you know which companies the best is to shop with.

All this is only the tip of the iceberg. Inmate Shopper also offers a handful of educational opportunities that are equal to none. One such listing includes a University that offers correspondent educational programs. With a new bachelor’s degree, an average prisoner can go on to study law and become a law professor just like Shon Hopwood.

Inmate Shopper is also the resource book that led an average prisoner to a promising writing career. Only a few short years ago author/writer Kelly Patrick Riggs noticed an Inmate Shopper being passed around a prison dorm and asked to read it. He found hundreds of listings for companies and organizations that help prisoners change their life. He too, needed a change. Kelly never dreamed of being a writer or publishing a book, but the Inmate shopper showed him how to be successful. Today, Kelly Patrick Riggs is a best-selling author that writes something every day.

To learn how to change a prisoner’s life with the Inmate Shopper visit, www.freebirdpublishers.com

About Freebird Publishers
Freebird Publishers (htttps://www.freebirdpublishers.com) is headquartered in North Dighton, Massachusetts (MA). They serve the entire United States and international locations. They have earned the confidence of prisoners and their families nationwide by being a leader in the business of providing necessary information and specialized publishing services to inmates and their loved ones since 2013. Freebird Publishers provides a full listing of the hundreds of services available to prisoners in their detailed publication, the “Inmate Shopper”. For more information about the “Inmate Shopper” and the tools it provides that an inmate can use to make their incarceration productive visit: https://www.freebirdpublisher.com or send a direct email to: Diane@freebirdpublishers.com, also accessible to inmates through use of prisoner email systems.